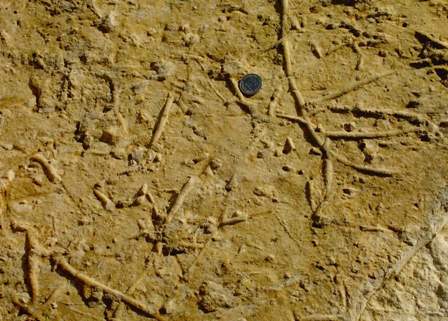 Even in karst areas, considerably thick soils can be found in accumulationzones. Here, the degree of groundwater vulnerability dependsnot only on the thickness, but also on the hydraulic conductivity andretention properties of the soil cover. The hydraulic conductivity offine-grained karst soils from Slovakia, Croatia and Austria was studiedwithin several international research projects, by the applicationof four different test methods. Results are discussed from differentpoints of view. Triaxial tests yielded a very broad interval between themaximum and minimum hydraulic conductivity (from 5.83x10-7 m.s-1to 3.50x10-11 m.s-1), therefore the mean value cannot be used in anycalculations. The consolidometer method gave lower values in general,between 9.40x10-10 m.s-1 to 3.59x10-8 m.s-1. However, this methodoverestimates the soil “impermeability”. Estimates based on grainsize are unsuitable, as fine-grained soils did not fulfil the random conditions of known formula. Finally, the “in situ” hydraulic conductivitywas measured using a Guelph permeameter. As expected, “in situ”tests showed 100 to 1000-times higher kf than the laboratory tests.This method best reflects the real conditions. Therefore, only thistype of data should be considered in any environmental modelling.In a soil profile, hydraulic conductivity depends on the mineral composition, depth, secondary compaction, etc. The degree and durationof saturation with water is very important for young soils containingsmectite. Their hydraulic conductivity might be very low when saturatedfor long time, but also very high, when open desiccation cracksoccur. A very slight trend was found, but only in Slovak soils, showinga decrease in the hydraulic conductivity with increasing contentof the clay fraction <0.002 mm. These results should contribute to abetter estimate of the protective role of soils in groundwater vulnerabilitymaps.